This article was published 13 years ago
Web

40 years ago, mankind made a ‘giant leap’

On July 20, 1969, two astronauts, Buzz Aldrin and Neil Armstrong, did the impossible; landing on the moon.  I was only a thought in my parents’ minds but they remember exactly where they were when Apollo 11 landed.  In front of the TV!  40 years later, the Internet is celebrating ‘the giant leap for mankind’ by documenting minute-by-minute exactly how the mission went. 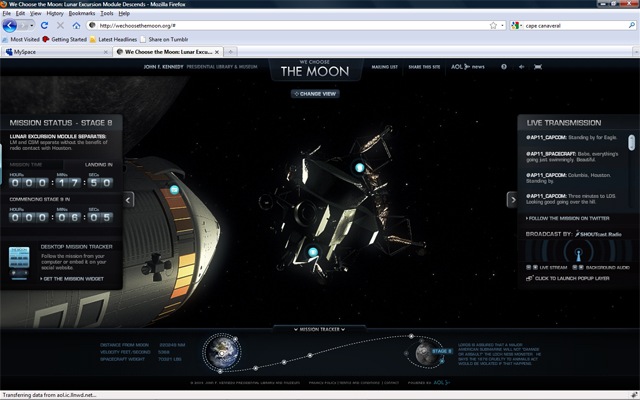 A computer animation of Apollo 11 separating to land on the moon. – Image credit: wechoosethemoon.org

The Presidential Library of John F. Kennedy, along with AOL, has developed a website to commemorate the 40th anniversary of the moon landing.  wechoosethemoon.org is a flash-intensive website that chronicles the path of Apollo 11 as it lifted off from Cape Canaveral, FL to the surface of the Moon.  Along with never before seen images and personal video taken from Armstrong Aldrin, the website is also airing the actual communication between the astronauts and mission control in Houston, Tex. using ShoutCast radio, a free open-source streaming service that AOL purchased in 1999.  Even though it’s powered by ShoutCast radio, the audio is not available outside of the website; like ShoutCAST radio app for the iPhone.

If you can’t listen to the live audio, you can also get manuscripts of the broadcast through Twitter by following @AP11_CAPCOM, @AP11_EAGLE and @AP11_spacecraft.  All Twitter accounts are in real-time and some even interact with each other.

It’s a great website but the only problem I have is that it’s a real-time event and you can’t go back to see some of the events that happened in the past if you missed it, like seeing the blast-off.  Maybe that feature will be available when the Eagle lands on the moon.

The only thing wechoosethemoon.org does not have is actual TV broadcasts of the moon landing, like CBS News.  It’s probably a copyright issue but that’s where YouTube comes in.