This article was published 12 years ago
Commentary

The iTV is not a cable killer, yet 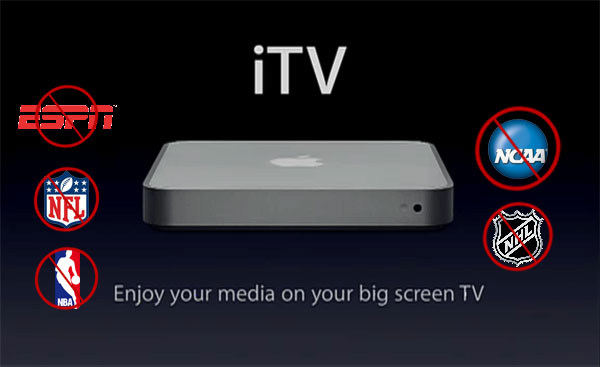 Rumors are rampant on the blogosphere that Apple is set to launch a revamped version of Apple TV that will be ultimate cable killer with a low price of $99 and an app store that will allow users to pay for stations they watch individually instead of subscribing to a package.

While this sounds like a great idea, there is one significant problem that will derail users from completely dropping the monthly cable bill.

Sports telecasts have become a lucrative, money-generating magnet not only for TV networks but for teams as well. TV networks like ESPN, CBS, FOX and NBC spend billions of dollars to secure the broadcast rights of college sports and the NFL. The most recent example is ESPN signing a $2.5 billion, 15-year agreement to become the exclusive broadcaster for the Southeastern Conference, which consists the Universities of Alabama, Arkansas, Tennessee, Mississippi, Georgia, South Carolina, Florida and Kentucky as well as Louisiana State University, Mississippi State and Auburn.

The trend continues as sports broadcasts are moving from traditional over-the-air broadcasts to cable networks.

The NCAA also signed a new TV deal for men’s basketball championship with CBS/Turner Broadcasting worth $10.8 billion over a 14-year period.

The University of Texas was offered their own cable network as a way of staying with the Big 12 conference instead of moving to the Pac 10.

But the most lucrative deal is still the NFL broadcast rights as football telecasts generate millions of viewers both locally and nationally. Super Bowl telecasts occupy four of the top 5 most watched television events with the 2010 Super Bowl as the most watched event ever with 106 million viewers. With those numbers, billions were spent to secure the broadcast rights with CBS paying $3.73 billion dollars, $3.6 billion spent by NBC, FOX paid $4.27 billion and ESPN spending the most, at $8.8 billion.

Many of these deals include Internet broadcasting rights but those rights still include some type of restriction that prevent users to watch live sporting events over the Internet.

Major League Baseball has an excellent online streaming service that allows baseball fans to watch every game online on your computer, smart phone and Internet-enabled TV. But if you live in Dallas and are a huge Texas Rangers fan, you have to watch every game on TV; MLB has placed restrictions that prevent home teams from streaming online in their market (I.E. New York Yankees aren’t available online in the New York market).

ESPN3 is only available on cable providers that have agreements with the network and they include local blackouts that are available locally on cable. During the NCAA baseball Los Angeles regional in, LSU fans could watch the NCAA regional baseball game on ESPN3 but the game was not available if you lived in New Orleans and Baton Rouge as the game was on Cox Sports TV.

NBC required users to have a subscription to cable in order watch live events online during the 2010 winter games in Vancouver and if you had a cable subscription, you were options were limited to curling and hockey.

Even though many viewers are switching from TV to Internet, some users will dump the cable company and get everything online. Cable companies know that a mass-exodus is coming and some cable providers are working to prevent that exodus. But if your a sports junkie, it will be a long time before you can watch the New Orleans Saints online, on your couch, in Jefferson parish.