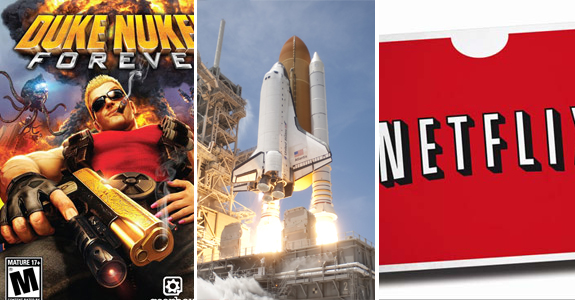 It was a volatile year for the technology sector: patent lawsuits, natural disasters, political protests, company mismanagement, odd acquisitions as well as famous flops and the lost of an iconic visionary. Many can’t wait for 2011 to end but before we look ahead as what 2012 may bring, we present our top tech stories of 2011.

Dubbed Duke Nukem fornever for the numerous proclamations of a coming release date with no official tailor or images, Duke Nukem Forever was finally released in the Summer of 2011 after spending 12 years in development, the original game studio no longer in development after scumming to bankruptcy and an unknown future of a release date, leading for a call for the game to be released as open source code.

The reviews of Duke Nukem forever were mainly negative (1up.com gave it a F), while some were mediocre (GameInformer game it 6.75 out of 10). The Redner Group, the PR firm hired by 2K games, did not like how the press reviewed and threatened to cherry-pick which media outlet would get advance copies for the future games based on reviews of Duke Nukem Forever.

The popular music service that swept most of Europe finally entered the United States in the Summer of 2011 by invitation-only after spending numerous years getting agreements from the major U.S. record companies like Universal, Sony and Warner Bros. The company even had a creative way for visitors to snatch an invite by checking their social networking score through klout, through Coca-cola or signing up with a UK address and changing it to the United States.

Car-manufacture Chevrolet even got in the Spotify invite game by gave away free premium accounts simply by liking their Facebook page.

Now that Spotify has entered the United States, the excitement has faded and an uncertain future is looming: Indie labels are pulling out and some performers are not allowing new albums to stream on Spotify.

8. The end of the space shuttle era

The last flight of the Space Shuttle Atlantis, STS-135, blasted off from the Cape Canaveral on July 8, 2011, ending 30 years of sending humans into outer space. The US space program now depends on Russia to send people and supplies to the International Space Station while will continue to send rovers to distant planets and satellites in space. What happens to the space program, as well as NASA in general, is anyone guess: will NASA return with a new space shuttle? Will NASA even survive? Will other emerging countries, like China, leap-frog the United States and become the dominant force in space exploration? Will the private sector take over space exploration?

Of all the companies that are truly glad the year is over (besides those listed in the next number) is Netflix. First, the company announced a 60% price increase and separation of DVD and streaming service, meaning you can sign up for either DVD and no streaming, streaming with no DVDs or both. Only problem is that customers were not happy with the price increase as well as the separation of streaming and DVD rentals and left in droves. CEO Reed Hastings tried to stop the gash wound of mass cancellations by announcing that the DVD rental side would become a separate company called Qwikster.

It didn’t get better: it got worst!

Customers still left in droves, their agreement with Starz! won’t be renewed in 2012 and the company continued to be ridiculed for the Qwikster move, mainly because the company didn’t secure the Qwikster Twitter handle and instead became an amusing diary of a pot-smoking user.

In the end, Netflix saw the writing on the wall and abandoned its’ Qwikster plans. Even the bad management plan, it still have huge positives for the year: they signed a streaming agreement with cable channel AMC to stream episodes of Walking Dead, Breaking Bad and Mad Men and announced they will stream new episodes of Arrested Development in 2013.