It was a volatile year for the technology sector: patent lawsuits, natural disasters, political protests, company mismanagement, odd acquisitions as well as famous flops and the lost of an iconic visionary. Many can’t wait for 2011 to end but before we look ahead as what 2012 may bring, we present the second part of our top tech stories of 2011.

Research in Motion and Hewlett-Packard have to be glad that 2011 is over and a new year begins, although both companies have an uncertain future in 2012. Both companies tried to get into the tablet market, both flopped. Hewlett-Packard even tempted with the notion of selling of the computer division, the part that generated most (besides printer ink) of its’ revenue. Both companies had management shakeups: HP went through two CEOs; RIM decided to keep both (Yes, TWO!) CEOs and added two Chief Operating Officers to the executive team.

2011 was especially cruel to HP with its’ tablet, the HP TouchPad, becoming the biggest product flop ever. The company shuttered the tablet division in August and slash the price from $499 to $99 for the 16GB model and $599 to $149 for the 32GB model. The discontinued tablet quickly became a hot seller: retail stores quickly sold out of the TouchPad, some cases as soon as the store opened and lines were formed at some Best Buy stores across the country.

Two natural disasters in 2011 not only caused billions of dollars in damage and a massive death toll but caused worldwide disruptions of electronic components used in computers, hard drives, mobile phones, consumer electronics and automobiles: the Japan earthquake/Tsunami and the Thailand floods.

The 9.0 earthquake struck the coast of northern Japan on March 11, spawning a 130ft tsunami wave that destroyed coastal cities in Japan and caused damage in Hawaii, California and some parts of Chile. While the damage was mainly concentrated in areas north of Tokyo and did not effect the industrial part of the country, the quake still caused manufactures to shut down for days, in some cases – months, because of the limited electricity supply in the country. The shut down affected all electronic products but the automobile industry was the hardest hit as manufactures could not produce components used in some cars, resulting in the prices of used cars to be higher than newer-made models.

Another global disruption occurred when monsoon rains flooded Thailand from July to December that closed several industrial parks in Bangkok that made critical parts used to run hard drives, resulting in sky-rocking prices of hard drives. Even though hard drive manufactures rushed to open factories in the Philippines to resume production closed by the floods, it wasn’t enough to keep up with the demand for hard drives. Some stores even placed a limit on the number of drives customers could purchase.

Both disasters show how much our world has become a globalize market and how floods in Thailand can effect your next computer purchase in the United States.

The White House sent out an urgent press release on a quiet Sunday night, only saying that the President would be making remarks about national security. It was anybody’s guess as to what it could be: a new terror threat, raising the terror alert, or breakup of a terror plot. Americans went into a nervous fret, wondering what the announcement would be. We finally found out what the announcement would be when former Keith Urbahn, former chief of staff for Donald Rumsfeld announced the death of September 11th mastermind Osama bin Laden. 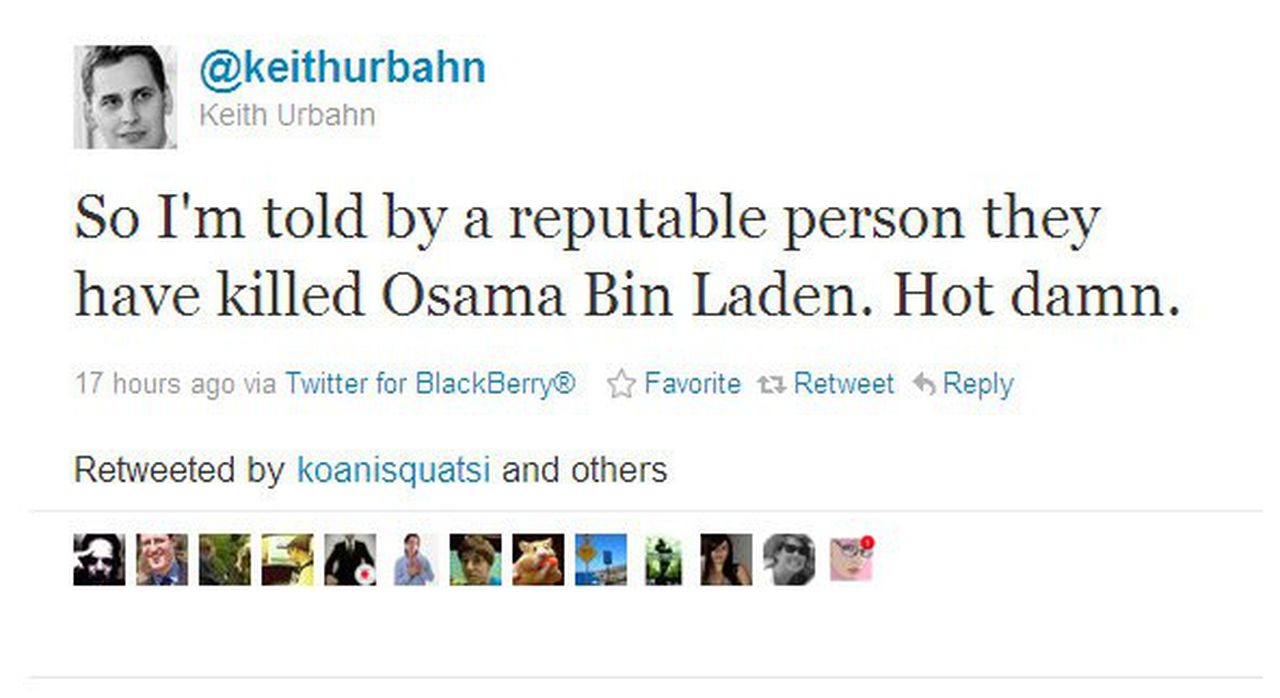 Former chief of staff to Donald Rumsfeld tweets that September 11th mastermind Osama Bin Laden was killed in a shootout with US forces – Image credit: Twitter

As word spread about the death of bin Laden, an average of 3,440 tweets per second were sent across the network, making it the most tweeted event at the time. One user unexpectedly live tweeted the Bin Laden raid from Abbottabad, Pakistan.

What turned out to be a regular story about personal information obtained by hackers not only became the biggest hacking story of 2011 but a huge black eye for Sony and the Playstation network as the network was down for months. Hackers were able to obtain credit card numbers and account details (including passwords) for 70 million users. It was an embarrassment for Sony and the company spend much of the time apologizing at E3 and gave away two free games when the service went back online.