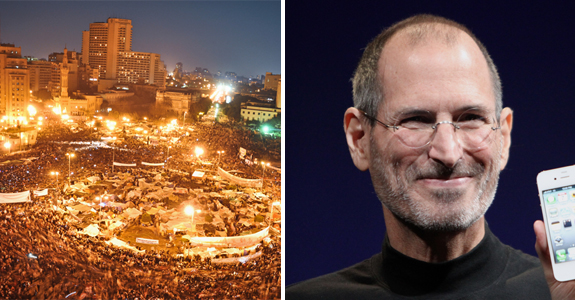 2. The death of Steve Jobs

When news broke that Steve Jobs submitted his resignation to the company on August 24 because of his ailing heath, the tech community began to accept the realization of Apple without Steve Jobs. When his death was announced on October 6, it came as a shock to many and Apple stores across the country became a place to mourn. Many compared the death of Steve Jobs to the night John Lennon was killed because both had a lot in common: they had a huge impact on society, had followers that had a cult-like atmosphere and people tried to imitate them.

When Steve Jobs died, people though of him as a revolutionary visionary that made our lives easy. After his authorized biography was release the following week, the opinion of Steve Jobs changed to an arrogant, self-centered, hippie lifestyle, workaholic person that did drugs.

What happens to Apple without Steve Jobs remains a mystery but one thing is certain: Steve Jobs left the company continuing to innovate, not leveling out or plateauing.

1. Political protests fueled by the Internet

I’m curious as to what the year 2011 will be remembered for ten years from now because I’m certain history will remember it as the year people were mad and vented their anger towards those in power.

And the Internet played a major part.

Some state governments tried to block access to the site, some went a step further with a ‘nuclear’ option of isolating.

Egypt’s president Hosni Mubarak read the chapter on seizing the state-run broadcast stations from the opposition rebels’ handbook and used that technique in a new way by ordered Internet Service Providers as well as wireless phone service in the country to serve all contact from the rest of world.

Both examples did not stop the protests, it only further the calls for action and demanded a new government. Internet access was eventually restored in Egypt and Libya and both dictators are no longer in power.

2011 showed us that the Internet, especially social networks, isn’t about hooking up with long-time friends from high school or announcing what you had for breakfast but as a tool for voicing your opinion and demanding freedom from a dictator that has ruled with an iron fist for several decades.