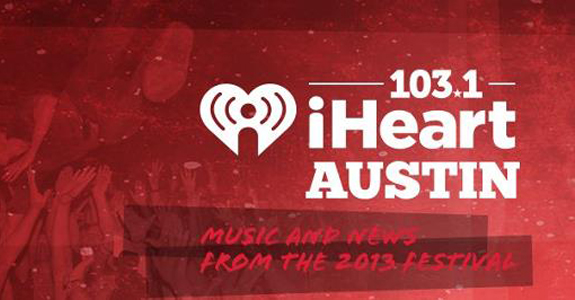 Let’s face the facts: radio is on life support. Today’s music sucks, all programming is controlled by one person thousands of miles away, DJ chatter – if the station still has DJs that live in the broadcast area – is nothing but hollywood gossip that people can read on TMZ. The only thing keeping radio alive is political talk (mostly conservative) and 24 hour news in metropolitan areas like New York, Washington DC and Los Angeles.

Despite that rosy picture of my viewpoint on radio, Clear Channel – the largest radio broadcaster in the United States – is trying something different. They are broadcast from the SXSW music festival – both online and terrestrial.

i heart Austin 103.1 not only provides updates on where artists are performing (including venue changes) but also air an incredible variety of music formats of artists that are performing at SXSW. They also broadcast live performances from their booth near the convention center. All this without commercial interruptions!

The FM station has one giant weakness: the signal. Officially known as K276EL-FM, it’s a low power station broadcasting at 250 watts from a transmitter on mountain 7 miles west of downtown Austin. The signal was barely listenable form my hotel in Round Rock and it was bleeding in with Killeen/Temple 103.1 Kiss FM.

Despite the weak signal, radio finally does something innovative and they should be celebrated for trying something new.